As foodies and food bloggers, we have been following the Garden activities since its inception, which dates back to when I was in 5th grade. It was such an honor to see it up close. 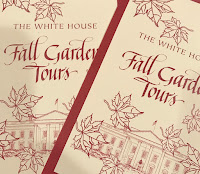 Come along as we share this
extraordinary experience          with you.
After we passed through security, we walked up the steep South Lawn hill towards the East Wing of the White House. I soon realized that I seriously underestimated its size: the space between the White House and the nearest avenue resembles a park.


According to the White House Garden Tour book, the grounds were purposely designed that way - "molded into a series of hills that give the impression of a sprawling rural landscape".

Our walk to the Kitchen Garden took us passed the Jacqueline Kennedy Garden located between the First Family's residence and the East Wing.


We continued our walk passed the South Portico where we enjoyed the sounds of a military band playing on the balcony. To the left of the South Portico sits the Rose Garden located just outside of the Oval Office.


Adjacent to the Rose Garden, the Oval Office windows look out to the First Kid's play set. I wonder when they were younger if Malia and Sasha Obama ever knocked on the window to say "Hi" to their dad? 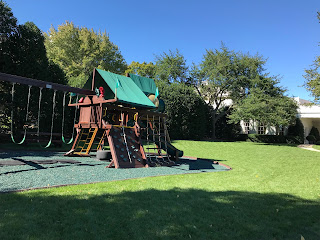 We continued walking, passed the Japanese Maple tree planted by President Cleveland and the fountain, then we saw it. 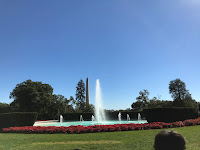 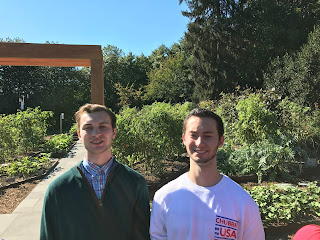 The Garden is a symbol of Mrs. Obama's efforts to raise a new generation of healthier kids. Just days before our visit, Mrs. Obama unveiled new wooden, stone and steel features that will enable it to be a permanent fixture for future presidents.

Mrs. Obama established the four-season Kitchen Garden in 2009. It is believed to be the first White House vegetable garden since Eleanor Roosevelt’s victory garden during World War II.


In its first nine months, the Kitchen Garden "yielded over a thousand pounds of produce," according to the tour book.  The harvest is used to feed the first family and guests at White House functions. A third of the garden's produce is donated to Miriam's Kitchen, a local organization that supports the homeless. 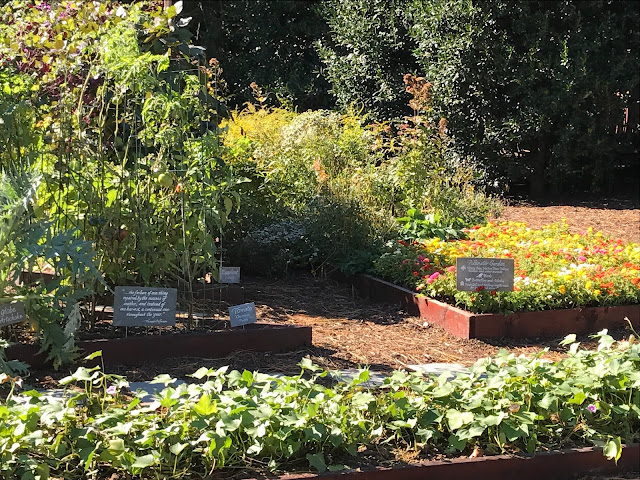 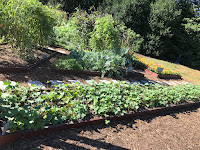 As you can see, the garden boosts an eclectic array of veggies, herbs and fruits. From the picture above, you can see the eggplant and tomato plants, but this is only about 10% of what the garden has to offer. There are over fifty varieties of seeds including many heirloom seeds.

Although there are several raised beds, one in particular stood out. The raised bed named after President Thomas Jefferson contains seeds from his famous Monticello estate garden in Virginia, including lettuce, brussels sprouts, beets, kale and artichokes. 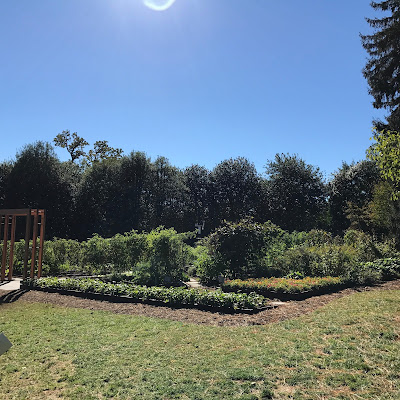 The best part about the Kitchen Garden is how Mrs. Obama designed it: an interactive, hands-on place to learn about food.

Every year, Mrs. Obama invites students from around the country to help plant seeds and harvest produce.

From its inception, former White House Chef Sam Kass and now Current White House Chef Cristeta Comerford have been instrumental in using the Kitchen Garden to teach kids about the benefits of gardening and eating whole foods.


The Obama's aren't the only family who reside at 1600 Pennslyania Ave. A family of bees - approximately 35,000 -  also call the White House home.

First Beekeeper Charlie Brandt and former White House Chef Sam Kass brought the bee colony to the White House lawn in 2009. Since that time, the bees have helped pollinate the Kitchen Garden and provide honey for the Obama family and state dinners.


To learn more about the Bee Hive click on the video. 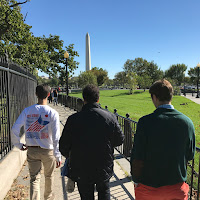 Just before we exited, we noticed these farm machines parked slightly out of view. A nod to the reality that keeping up all the White House gardens and grounds is an enormous job.


Our visit was an amazing experience. I'm still in awe that I got to see the White House Kitchen Garden! I hope Mrs. Obama's new garden features will enable it to be a permanent addition to the South Lawn, so that others will have the same opportunity, as we did, to visit and learn from it.

Growing up in an Italian-American household, eating fresh, whole foods is a daily part of our lives. It is the reason we started this food blog five years ago. This tradition allows our bodies to operate with more stamina and strengthen our immune system. We plan to continue this tradition when we have families of our own.

Much thanks to the First Family and Mrs. Obama's organization Let's Move for leading the charge.

Here's one more cool video I found that demonstrates how the White House utilizes the Kitchen Garden for State Dinners.