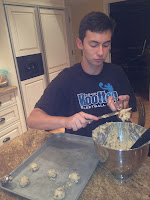 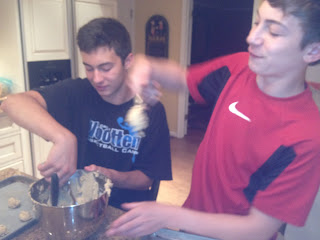 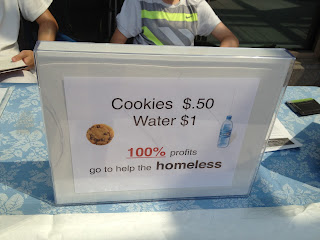 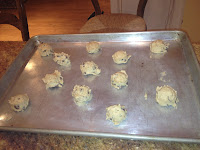 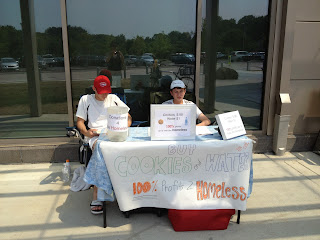 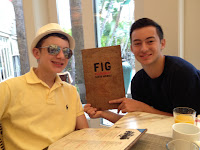 The Fig restaurant motto is "ingredients first." Located in the Fairmont Miramar Hotel in Santa Monica, the bistro certainly lives up to its motto. Since our hotel package came with breakfast, we ate their every morning.

According to their website, their "menu is built around what is grown in season" which they buy from local farmers. We know this is true because we ran into Fig's head chef Ray Garcia at the Santa Monica Farmer's Market. Ray is one cool chef who was very eager to tell us about his restaurant.
Over the course of several days, we tried a few breakfast entrées (see below). It was cool that Fig made some of it's own products such as butter and syrup. 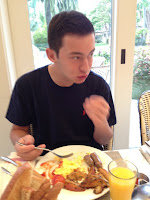 
There was nothing we ate that didn't have the most fresh and pure taste.  Also, it was presented in fun and simple ways like the toasted bread served in a napkin.

We also ate dinner at Fig once during their “Fig at Five” special where everything on the menu including drinks is half priced if you order it before 6 o’clock. We don’t have dinner pictures to show you because we ate with friends and just enjoyed our meals.  But we can say that the food was just as good at dinner....and our parents loved the half priced value. 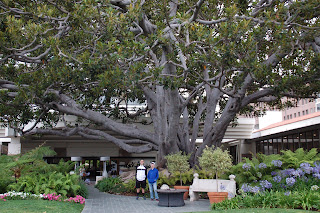 The restaurant got it's name from the historic fig tree that stands at the entrance to the hotel. Can you see how big the tree is compared to us standing at the tree base?

Overall, FIG restaurant was an adventure in itself. The restaurant space was very open, airy and comfortable especially the seating area overlooking the pool with ceiling to floor windows. And the food....was absolutely fantastic!!!!!!  We looked forward to getting up and going to the restaurant every morning.

Charles gets a surprise for his 15th birthday 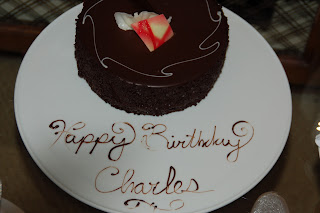 Charles celebrated his 15th birthday while we were on a family vacation in Los Angeles, California recently.

We had many Cali food adventures that we'll share with you.  But the highlight of our trip was .......

The hotel we were staying at - The Fairmont Miramar in Santa Monica - found out it was Charles's birthday and surprised him with a chocolate cake delivered to our room.  The cake was presented on a platter that had "Happy Birthday Charles" written in chocolate!!!!

This is definitely the best chocolate cake we've EVER eaten.  Thank you Fairmont Miramar Hotel .... BEST HOTEL EVER!

More to come on the Fairmont Miramar's restaurant Fig in our next blog.......

What did we make for dinner with our  Breezy Willow Farm CSA vegetables, eggs and bread ????...... 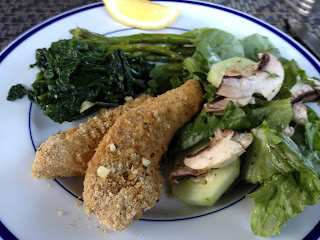 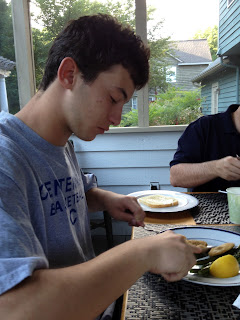 Charles eating outside on our deck.

Our family has belonged to Howard County's Breezy Willow Farms CSA (Community Supported Agriculture) for a number of years.  Breezy Willow is a certified organic farm located in West Friendship owned by the Caulder family.


What's a CSA?  It's when the community buys a "share"of what the farmer grows.  So, we signed up for their 24 week spring/summer CSA which runs from June to November.  Each week we get a huge selection of organic, seasonally fresh fruits and vegetables, local bread and eggs.

Why do we buy from a farmer rather than buy all our food in a grocery store? It's a win-win situation because we get better quality & better tasting farm food and we support farmers in our own county so they can stay in business. Plus, we get to know the farmers who actually grow our food.

He's how it works.  Once a week we go to Miller Branch library (one of their many Howard County pick-up locations in addition to their farm). 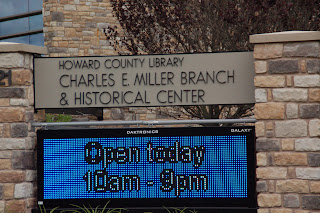 We sign in with the farmer at the check in table. Then we carry our bags and fill them with an assortment of farm produce from bins that are laid out in an assembly line. 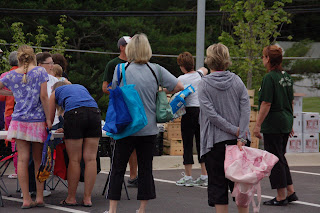 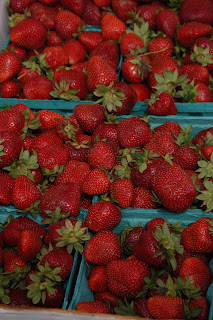 This week we received the best strawberries EVER. Melt in your mouth strawberries that barley made the car ride home. 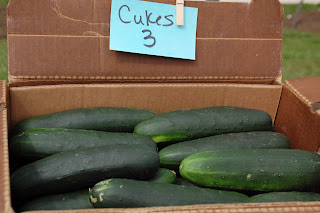 At the end of the line we get to choose from a variety of Great Harvest Bread company breads including Challah, Cinnamon Chip, Honey Whole Wheat, rolls, blueberry loaf & more.  At the suggestion of the farmer we decided to try the Rosemary sliced bread.  He said that it was very dense, but if we used a toaster on a bagel setting we wouldn't be disappointed.  He wasn't kidding....it was amazing!!!!