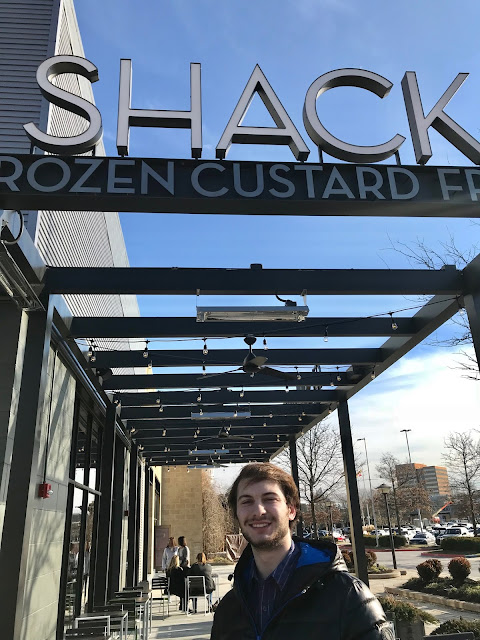 Today, I was invited to a complimentary preview meal at Shake Shack, the newest restaurant at the Mall in Columbia. Located in the corner space formerly occupied by Champs, Shake Shack officially opens on Wednesday, December 20 at 11 a.m.

The American eatery, known for its burgers and shakes, held this private event to introduce their menu to the community and as a fundraiser for Howard County's Grassroots Crisis Intervention Center: a nonprofit organization that provides crisis and suicide intervention programs and shelter and assistance for the homeless.

Shake Shack started in New York City as a Madison Square Park hot dog cart. As news spread about the cart, its popularity grew. In 2004, the company opened a permanent kiosk in the park and continued to expand its presence and menu. Today, there are over 150 restaurants worldwide - including the Columbia location. 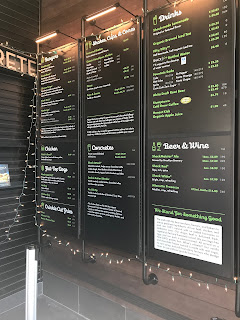 The first thing that caught my eye when I walked into the Columbia store was the clean, industrial feel. With its high ceilings, stainless steel signage and floor to ceiling windows, the restaurant has a hip and modern vibe. 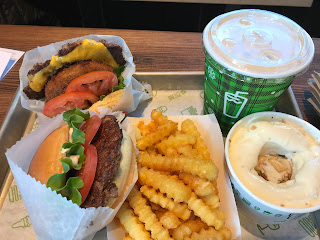 I ordered the ShackStack burger (cheeseburger and a ’shroom burger topped with lettuce, tomato, and shacksauce), crinkle cut french fries, and the salted caramel milkshake.

My mom ordered a ShackBurger (cheeseburger topped with tomato, lettuce, and shacksauce) and the Pie Oh My (vanilla custard atop a seasonal pie).


The Shack Stackburger is a combo of the 'shroom burger (a crisp-fried portobello mushroom filled with melted muenster and cheddar cheeses) and a cheeseburger.

This burger has a lot going on. You can see from the picture how the cheese oozes on the patty and, when in tandem with the melted cheese from the portobello mushroom, provides a distinct gooey ecstasy of flavor that we all crave in our cheeseburgers. Even though the burger was a little messy due to the cheeses (the wrapping helped assuage this), rest assured that this burger is not greasy.

My mother ordered the restaurant's staple item - the ShackBurger (but without cheese). It is similar to the Shack Stack except less ingredients. This is a classic. The simple taste of 100% all natural angus beef patty with salt, pepper and shack sauce (a mix of pickle brine, tomato, and mayo that is similar to a chipotle mayo) is perfection. The shack sauce makes this burger for me.


The fries were a hit with me and mom. Moderately salted, incredibly soft on the inside with a slight (cannot stress how minute this is) crisp on the exterior, and cooked to golden brown. Best part, I can taste the natural potato flavor and not grease. These are the true epitome of fantastic fries; I might even come back just for fries.

The Pie Oh My dessert, a seasonal pie topped with vanilla custard, was suggested by the cashier. My mom loves apple pie but was not crazy about this one. It was way more dough than apple by a 3:1 ratio. To make matters worse, the dough was hard to break with a spoon. The custard, likewise, was thick but not heavy on the vanilla flavor.


The salted caramel shake was a knockout with me and my mom. The flavor was intense, equal parts salty and caramel with hints of other spices that we couldn't figure out, but just made it fantastic.


Shake Shack is a great addition to the Howard County restaurant scene. Anyone hankering for American comfort food, this is your place. In addition, the store location next to the AMC movie theatre makes it a great pre or post movie meal.

Bravo Shake Shack for partnering with Grassroots to help our community.

Posted by Unknown at 7:45 PM No comments: