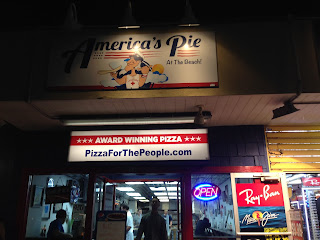 If you want a change from your typical boardwalk joint, head to America's Pie - where creativity and innovation are their speciality. Opened August 2015 on Rehoboth Avenue, America's Pie serves up a variety of hot entrees (wraps, traditional and original pizza pies, sandwiches, and more) by a warm and fun staff. 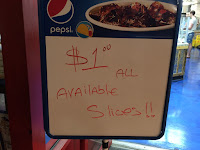 After the staff welcomed us, they walked us through all the amazing menu choices. There are some crazy interesting combinations like the beccaberry pizza (blueberries, bacon, basil, mozzarella, baby spinach arugula, topped with red wine reduction) or the George pizza (pistachio and arugula pesto, red wine and honey poached pear, prosciutto, mozzarella, ricotta, topped with red wine reduction). The subs, likewise, are comprised of traditional favorites and new twists.


Even though the interior is quaint, the establishment utilizes every crevice to display decorations and photos. Like the titular name implies, the theme for all decorations is   American culture, and I love it! It's so awesome to order the James Dean pizza, sit down, then look up to find a picture of James Dean starring back at you. Even the logo protrays Uncle Sam  wearing a tank top carrying a surf board. Totally Americana. 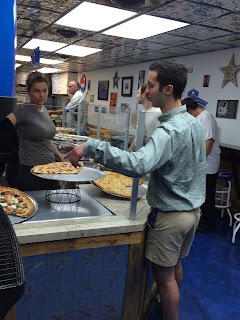 Before I start talking about the pizza, let me just say how colossal each slice is. I'm a big eater and I usually scoff down 4 normal slices of pizza in order to be satiated. However, America's Pie issued a challenge to me: still be hungry after 2 slices. This was the first and last time I lost a competition to a slice of pizza.


Charles selected a slice of the holiday white - a white pizza with broccoli, spinach, tomatoes, and ricotta. Charles liked how the thin slice was mostly soft and with some crispiness added here and there. Even though we were among the last customers of the day, it tasted fresh. Charles' main gripe with this pizza type was that the ricotta and mozzarella cheese combination was, well, cheesy. He's not a cheesy guy. If you are, it will be a party in your mouth, for sure.


I ordered a slice of the crusty crab: crab cake mix, lump crab meat, mozzarella cheese, red pepper, celery, chives, and topped with bread crumbs. Even though this pizza is one of the most avant-garde, it's still in the experimental phase. For instance, it tastes exactly like crab or a crab cake, but it is incredibly dry. One of the staff members claimed that they are still perfecting the formula and hope to create the right balance between flavor and texture soon. But currently, this pizza just has a lot of potential.


Charles selected the Idaho potato as his second slice - a mixed cheese pizza with potato, bacon and caramelized onions. Who would've thought a loaded baked potato on a pizza slice could create such a tasty combo? All the ingredients were densely packed on the thick slice of pizza,  leaving no spots absent of toppings. Bite after bite, Charles kept pondering if the item was more baked potato than pizza and vice versa. Although this one question remained an enigma, Charles knew one thing without a doubt: the pizza was delicious.

I chose the James Dean as my second slice: BBQ pulled pork (usually BBQ chicken but sometimes they change it), scallion, red onions, pepper jack, mozzarella, topped with chipotle ranch. Out of all the pizza Charles and I tasted, we can agree that the James Dean is the best. The pizza combines the best aspects of the aforementioned slices (soft, slightly crispy, and ingredients being densely packed) in tandem with a moist texture. Just one small caveat: grab a few napkins because it can get slightly messy. 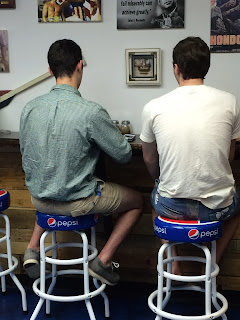 America's Pie is one of the best places for traditional and original pizza at Rehoboth Beach. It's our new favorite place and we can't wait to go back.

This brand is here to stay. The workers revealed ambitious plans to expand to California and Towson, MD in the near future.

Posted by Unknown at 2:24 PM No comments: