Charles and I were invited to the grand opening of Maggiano's Little Italy at The Mall in Columbia  that included a pasta ribbon cutting ceremony and a VIP luncheon.
Maggiano's specializes in made-from-scratch, every day Italian-American family style cuisine, based on recipes that have been in Italian families for generations.

This sounds like our own Italian American family. Since many of our family meals are from recipes handed down from our own relatives in Sicily, Naples and Rome, we were excited to try the meals at Maggiano's. Charles was busy so I went by myself (well, my mom had to drive me).

The ribbon cutting ceremony was held in front of the entrance next to the awesome outdoor patio. The ceremony was interesting because the ribbon was actually made from 10 feet of braided whole wheat fettucini pasta. I'd never seen that before. 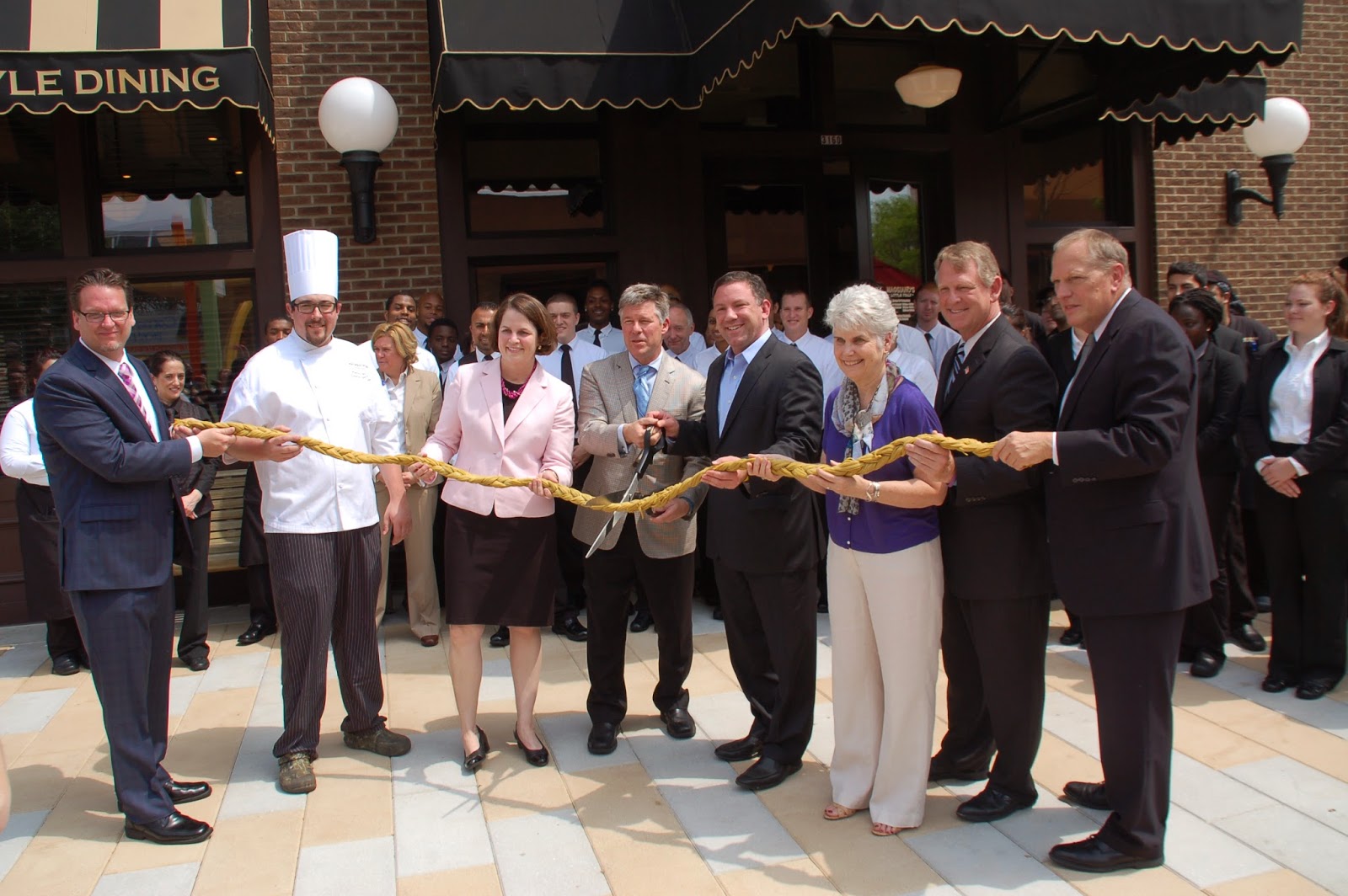 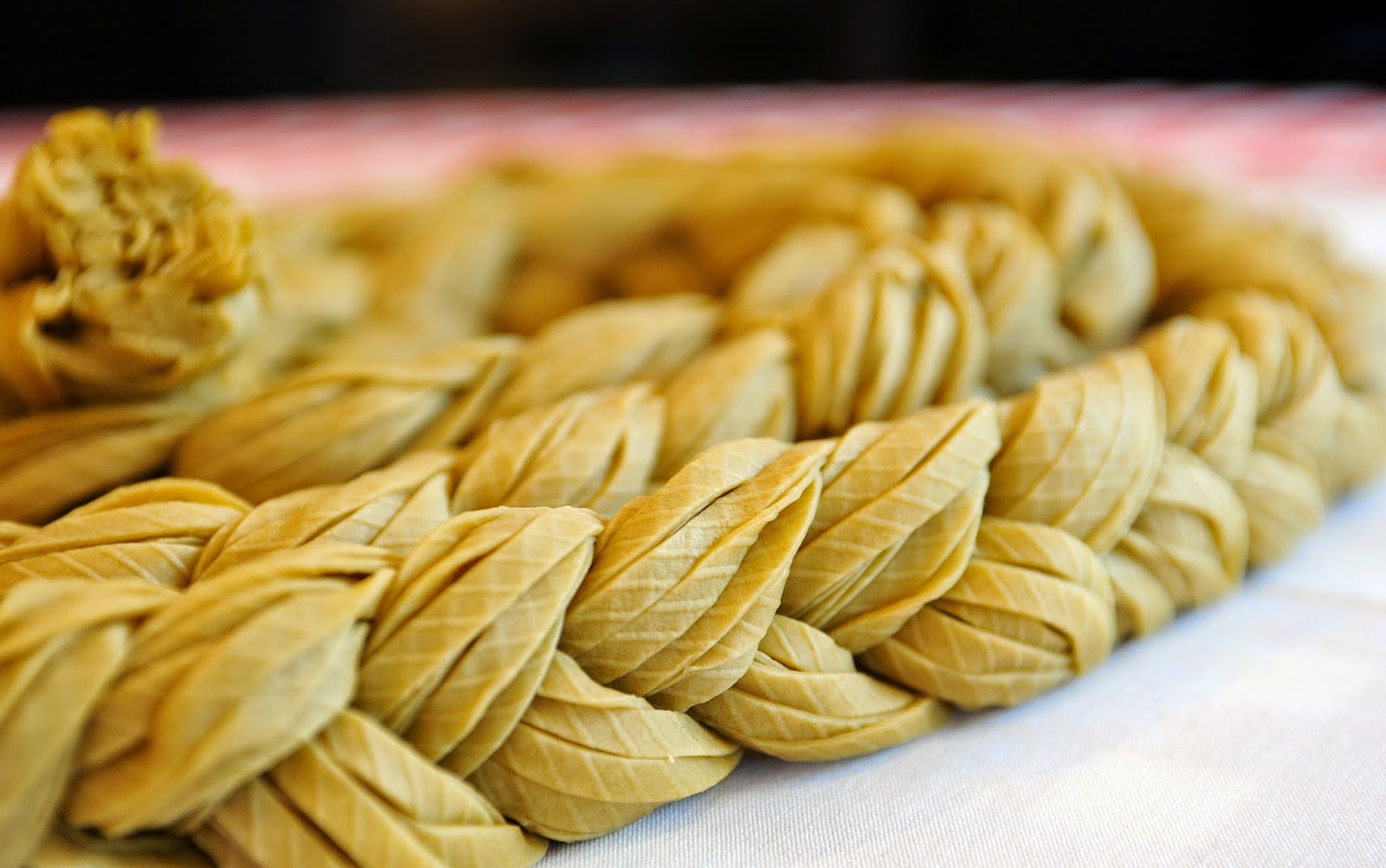 After the ceremony, I met some important people - Howard County Executive Ken Ulman, Howard County Council Vice Chairperson Courtney Watson, Maggiano's -Executive Chef Matt Delano, Managing Partner Michael Woernle and President Steve Provost. They were all really cool people who treated me like an adult - even though I'm a teenager with braces. 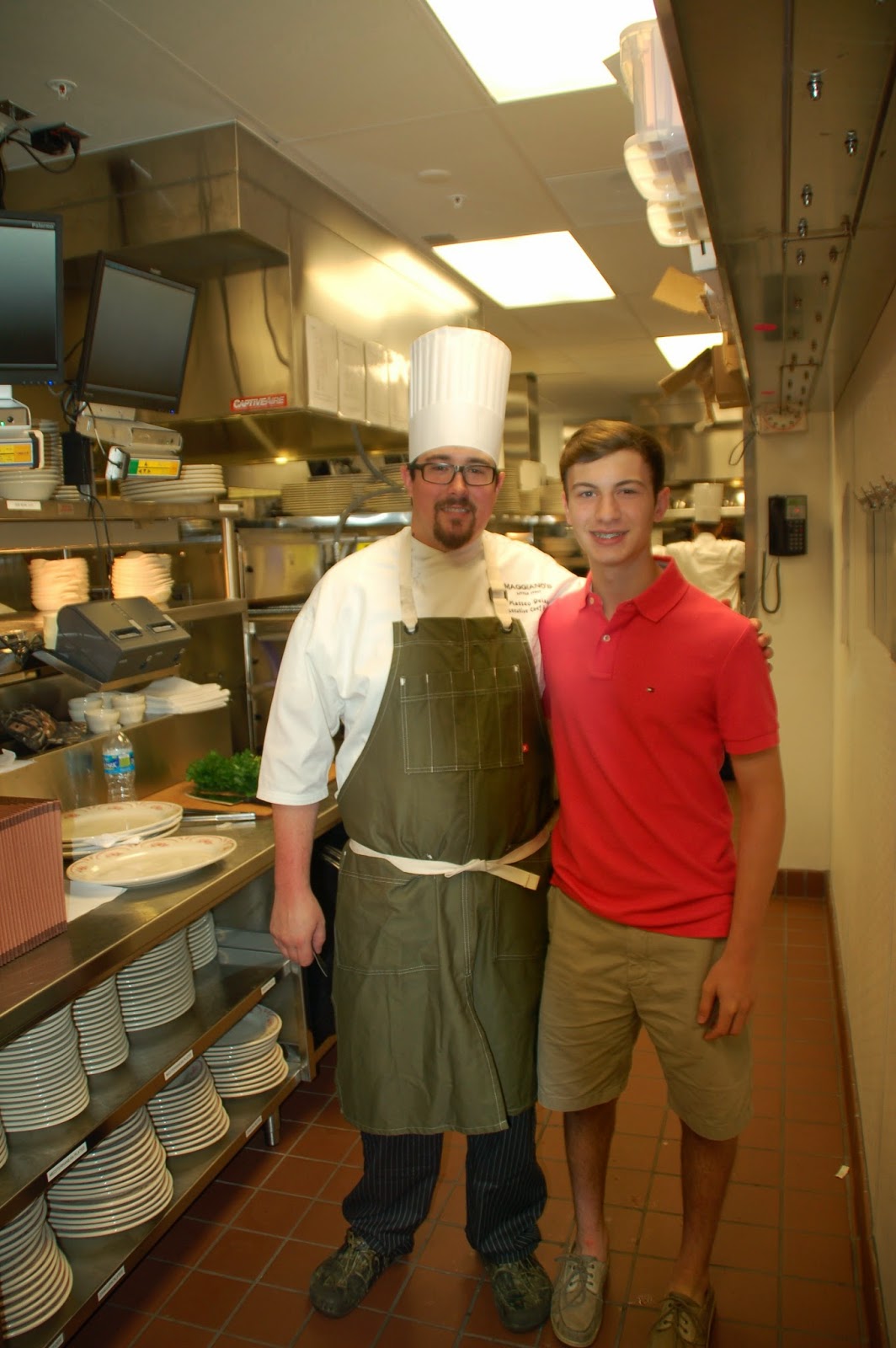 Chef Delano even took me through the kitchen to see where all the action happens.

Although the restaurant can sit ~300 people, it feels cozy inside with   black leather booths combined with tables covered in red checker cloths that can be pushed together to make room for large parties - like the one we sat at for the luncheon. The dinning room's floor to ceiling windows makes the space feel open and light. 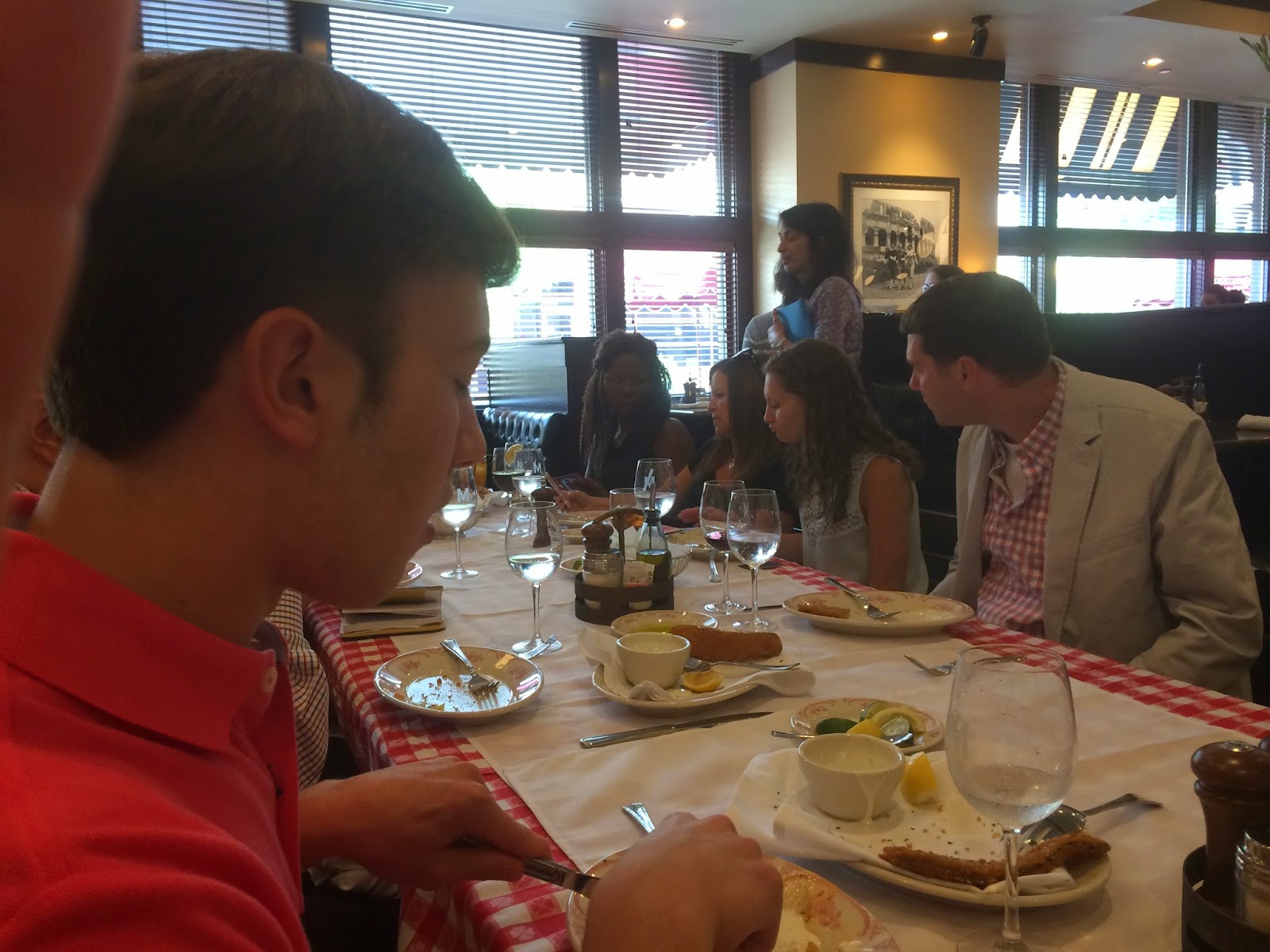 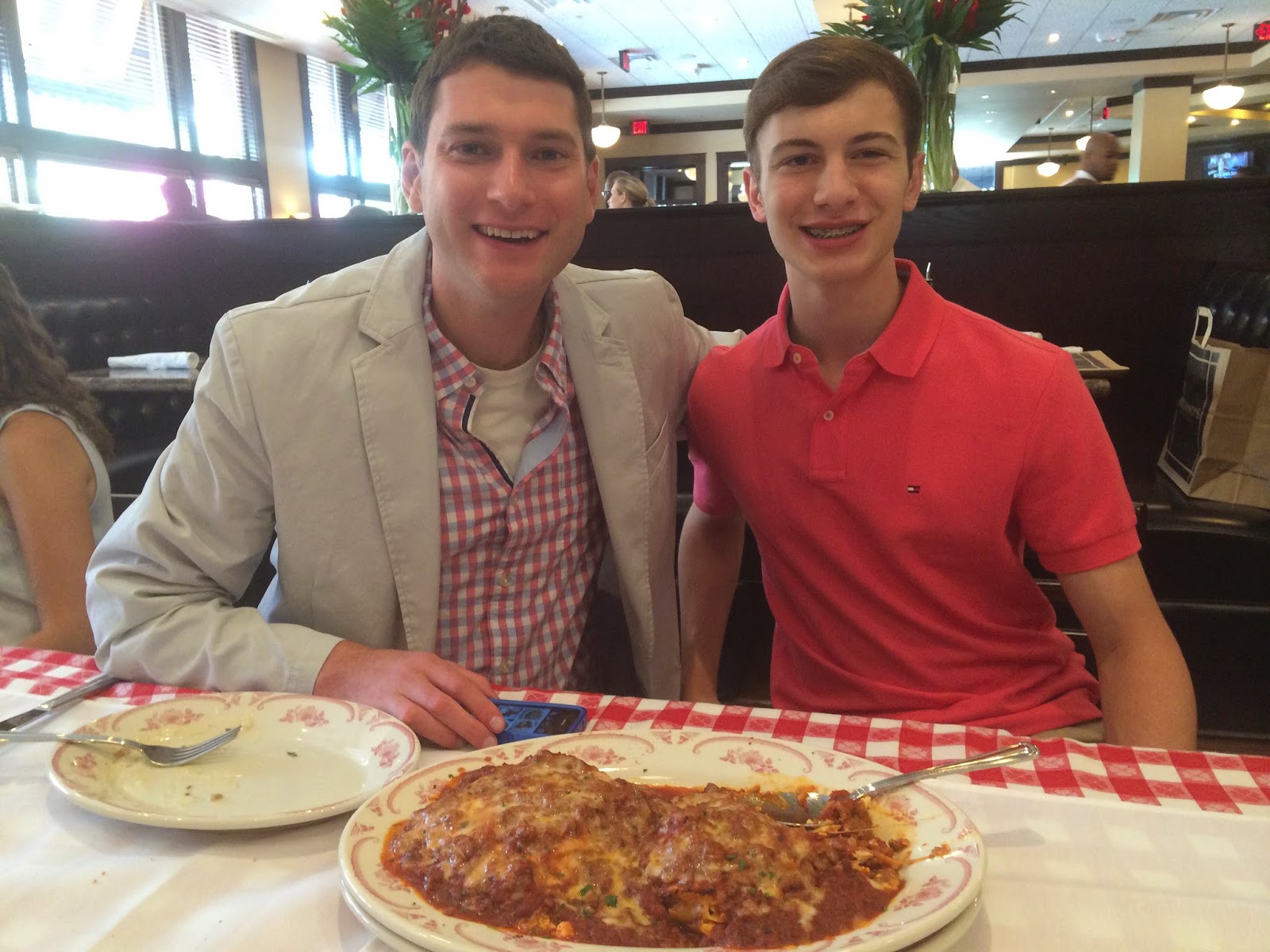 The guy sitting across from me was none other than Reagan from The Mix 106.5 morning radio show. Charles and I listen to that station all the time.

Before the food came out, the waiters and chef asked if we had any food allergies. They said they could make almost any kind of dish to accommodate allergies like gluten free pasta and sauces.


Our luncheon was served family style but on the regular menu you can order it family style or as individual meals. We started with delicious warm Italian bread with olive oil dipping sauce.

Followed by the chopped salad - lettuce, crispy prosciutto, tomatoes, blue cheese, avocado well mixed with their house dressing that had hints of mustard and vinegar. I could have eaten the entire bowl. This salad is offered on the menu as a side or main course.


When I asked Chef Delano what he'd recommend as an appetizer for a hungry teenager like myself, he suggested the Crsipy Zucchini Fritté with Lemon Aioli sauce. I wasn't sure I'd like the sauce but it was creamy goodness with a little bit of fresh lemon. The zucchini was cut very thin which made it light and crispy. He was right that I'd like it.

They are described as "jumbo lump" crab cakes on the menu. They certainly lived up to that claim. The crab cake was a good size portion seasoned with old bay seasoning that didn't over power the crab meat. Combined with the zing of the roasted pepper sauce it was a hit. The dish was served family style, but I liked it so much I went back for thirds.

Then they rolled out the pasta dishes - their classic Mom's Lasagna and famous Rigatoni "D" dish. 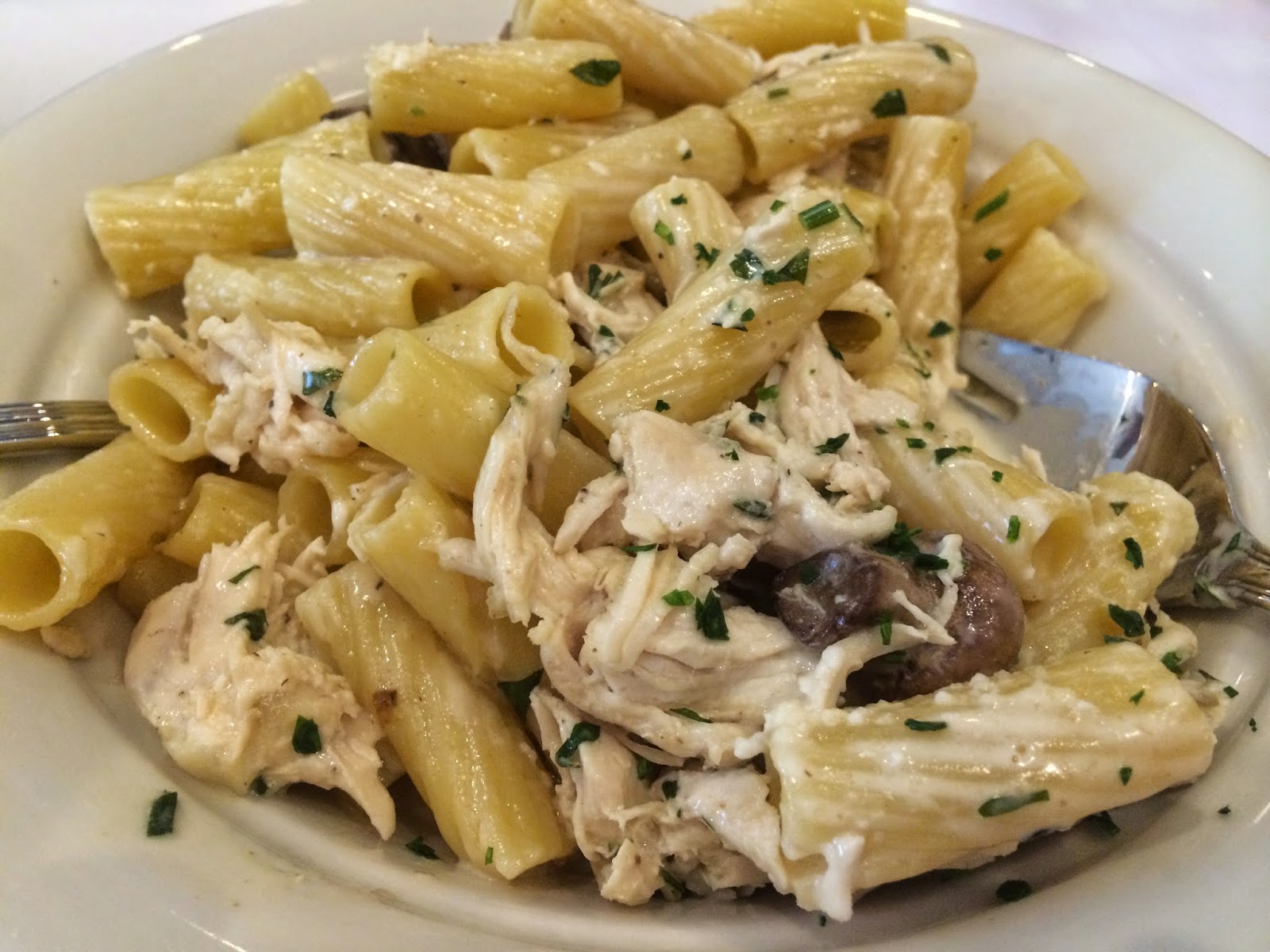 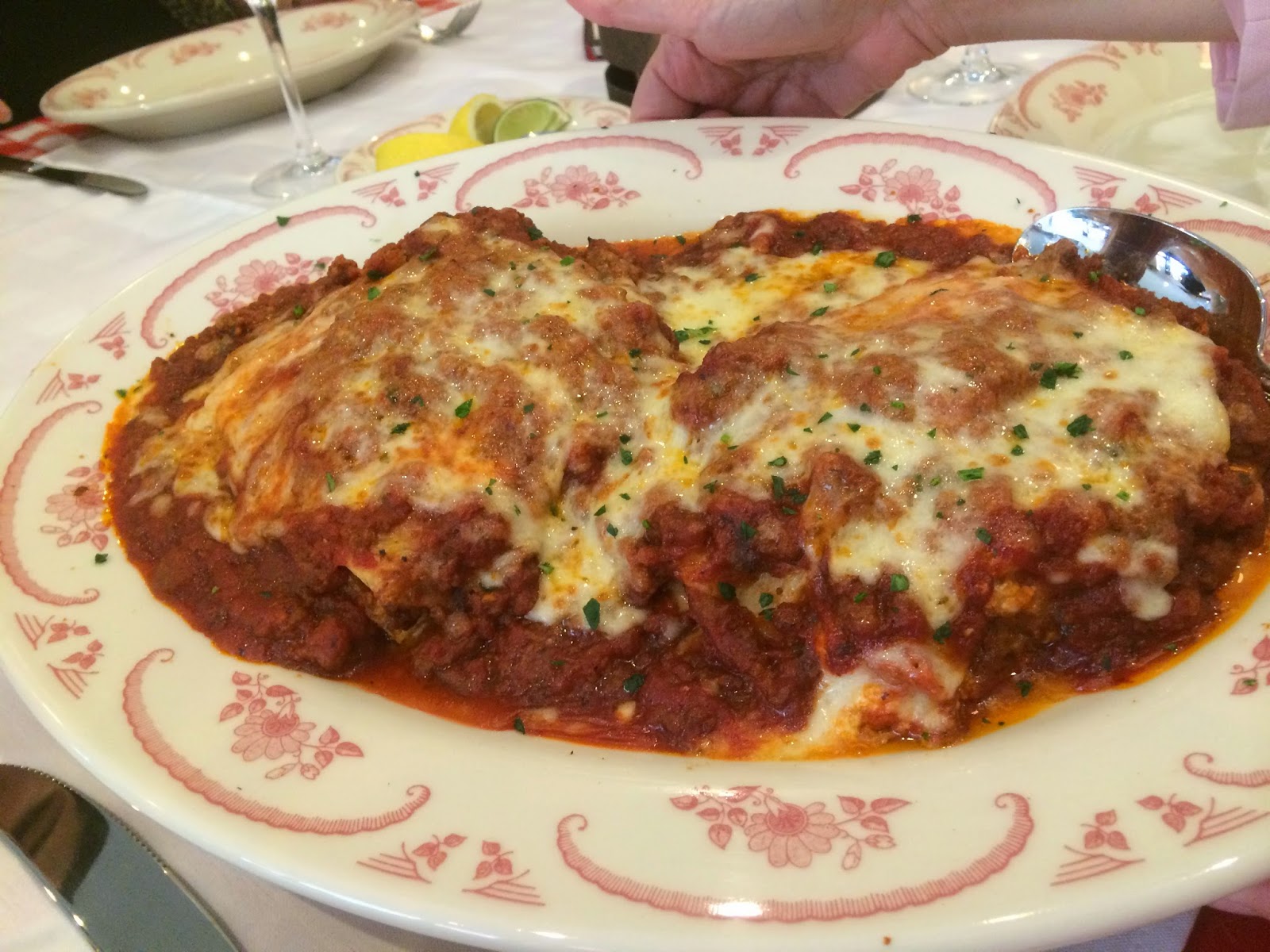 Considering I'm a HUGE fans of my grandmother Alberta's famous lasagna, I wasn't sure how Mama Maggiano's would stack up.  But with its crumbled meatballs and sausage, ricotta cheese and sweet sauce, it held its own. While my grandmother uses dry pasta, which makes the lasagna thicker, Maggiano's was bursting with thick meaty sauce and tender layers of fresh pasta. Similar to my grandmother's sauce, it had a slight sweetness to it. This is the real deal.

The Rigatoni "D" dish is herb-roasted chicken, mushrooms, caramelized onions in a marsala cream sauce. Did I ever mention how much I love mushrooms and caramelized onions in marsala? Oh yeah, this dish had it going on. All my favorite things in one dish. The only, and I mean only, thing I would change about this dish is to ask for more sauce next time. 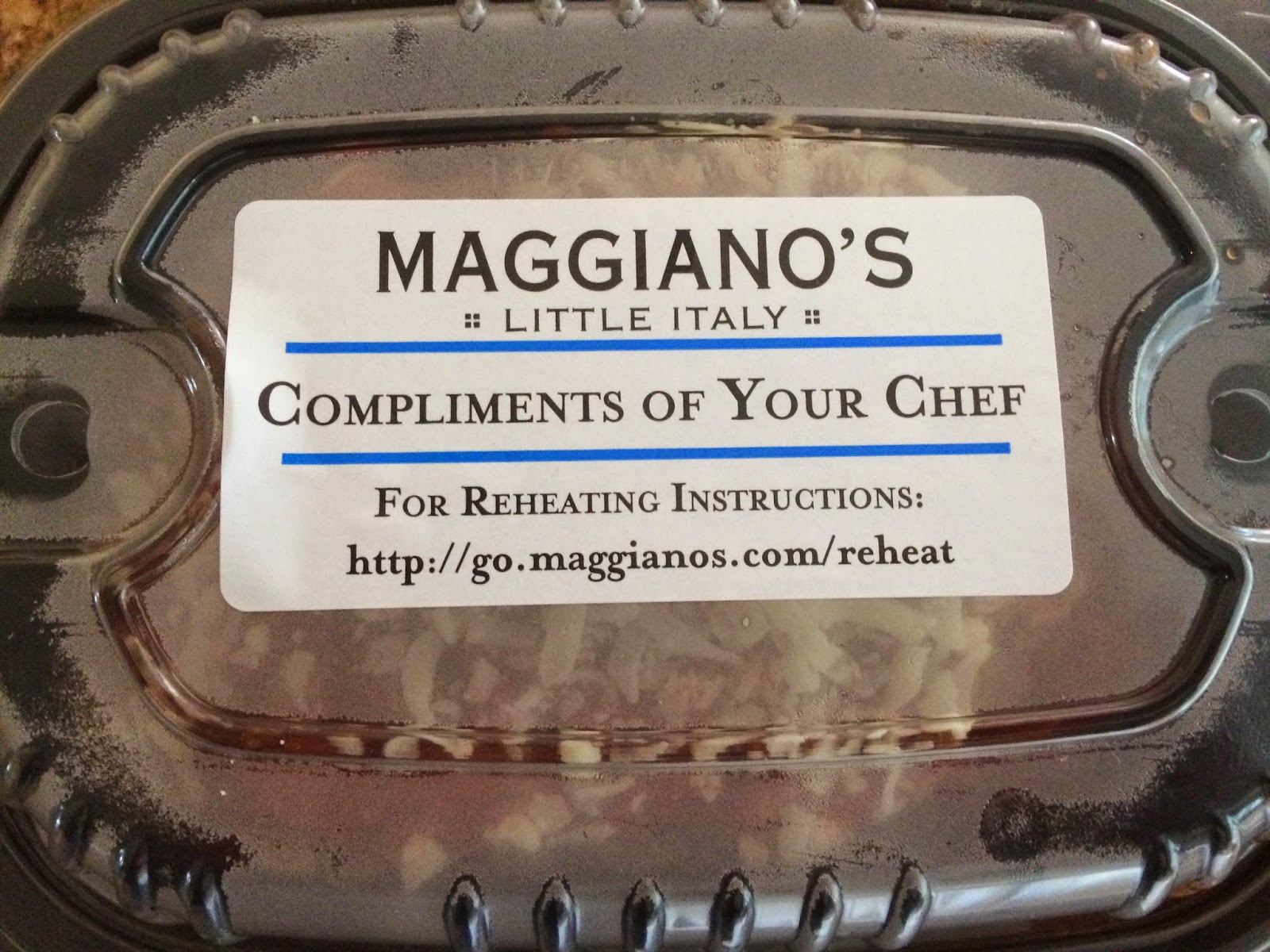 Unfortunately, I had to leave the luncheon before it ended (I went on my school lunch break), so I missed a few more dishes and dessert.  As I was leaving, Maggiano's Steve Provost gave me a bag full of goodies to take home. It made me feel like when we have family over our house for big dinners, my mom and grandmother always make extra to send guests home with food.

I thought the "extra" food was special because of the VIP luncheon, but I learned it's actually part of the normal experience at Maggiano's. It's called the “On The House Classic Pasta,” which sends any guest who orders one of eight handmade pastas home with a second Classic Pasta of their choice, compliments of Chef Delano.  I was happy to hear that.

As I was walking out, I noticed a separate section in Maggiano's just for take out orders. The person there told me they also deliver and sell pasta sauces by the jar. The best thing I learned was they take reservations - which on a busy Friday or Saturday is terrific because nearby restaurants like Cheesecake Factory don't take reservations. 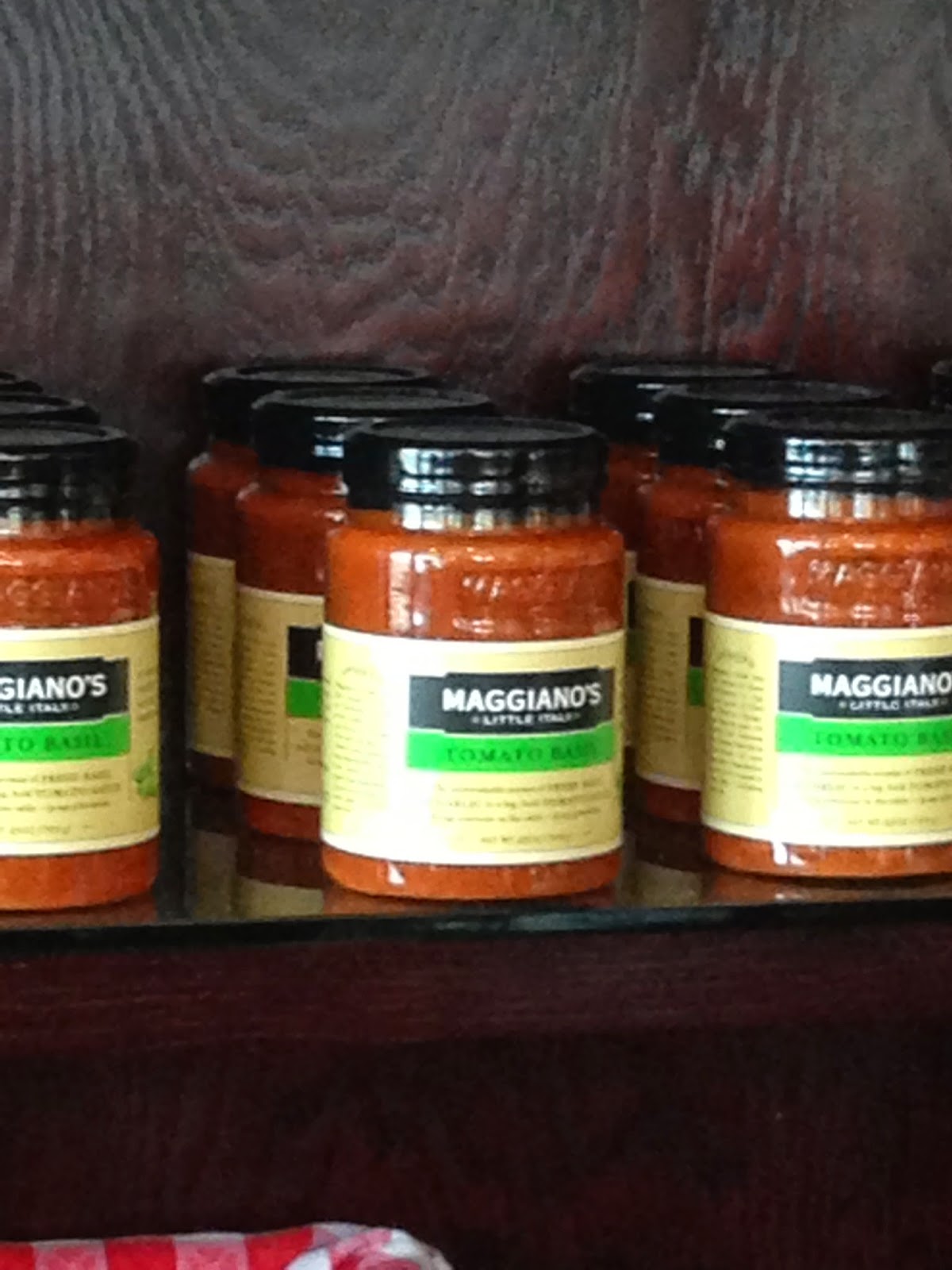 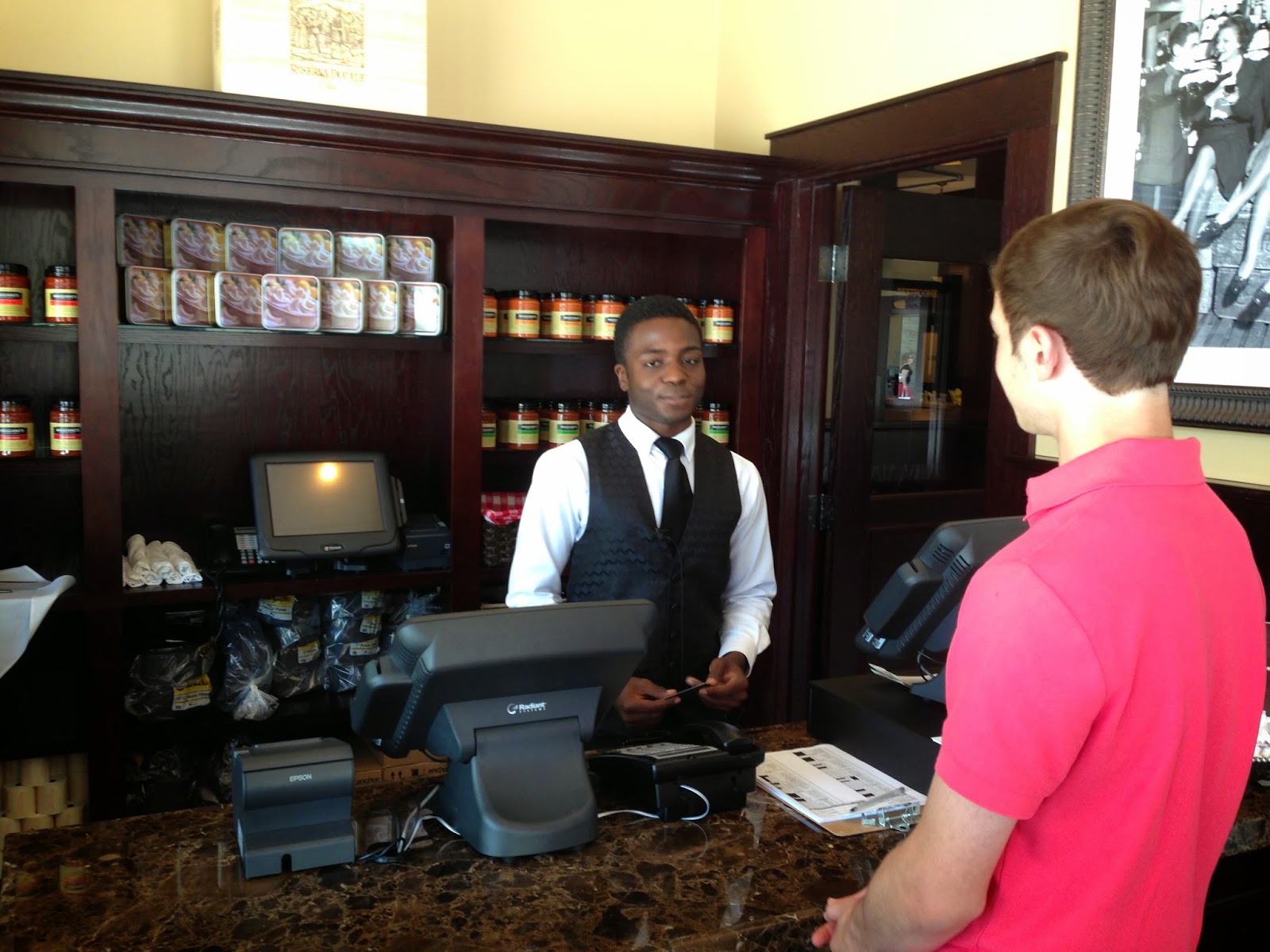 I am definitely coming back and bringing Charles and my family. There are so many things on the menu that I want to try such as the steamed mussels, honey mustard salmon club sandwich, mushroom ravioli al forno and salmon oscar.

If you visit Maggiano's let us know about it. And if you see me and my brother eating there, come say hi.