My classmate and friend Arman recommend that I try Nora's Kabob  because the food is similar to the Persian cuisine that he and his family make at home. 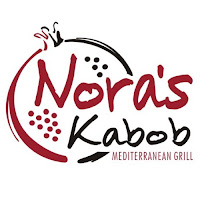 The restaurant is small, about four to five tables. I'd suggest you reserve a table or dine at a non-busy time to avoid a wait. Arman and I went on a Wednesday for dinner so we were fine. 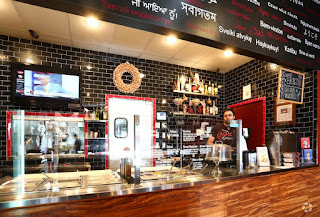 I think its pretty cool that they have a banner that says "hello" in just about every language, way cool. 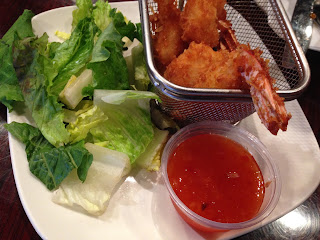 For appetizers, Arman and I decided to split the "Coconut Shrimp" -  five jumbo coconut shrimps served with sweet & spicy sauce.

The shrimp was slightly crunchy on the outside but delicate to the bite. Be prepared for a potent coconut taste. I was surprised that I really enjoyed it in tandem with the sweet and spicy sauce. 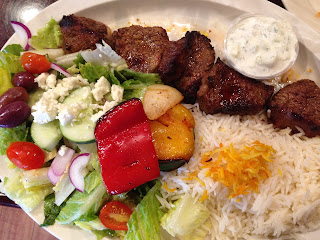 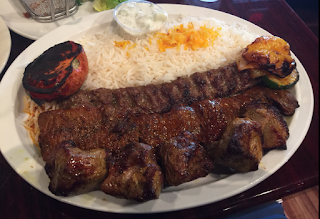 I ordered the "Beef Shish Kabob" ($15.99), marinated chunks of filet mignon charbroiled over an open flame. For my complementary sides, I selected half of a greek salad and half basmati rice. The portions at Nora's are not large for a hungry teenager like me, but the quality of the food somewhat compensated for the small size entrees. There were only five filet mignon pieces on my skewer - all juicy, succulent, moist, and fork-tender - but I really wanted more for the price. Unfortunately, I left hungry.


Arman chose the "Nora's Soltani 1" ($17.99), which is a "Barg Kabob" (strips of filet mignon) and a "Khoobideh Kabob" (ground beef & lamb). He decided to have just basmati rice as his side and ordered an extra skewer of lamb ($8.99). He praised the grilled meat as well seasoned and tender. Also, he was enamored with the grilled vegetables that he likened to his mother's cooking. While there was more than enough food to satiate his hunger (in fact he took some home), Arman was displeased that the extra lamb skewer costs almost $9. On a previous visit, Arman ordered an extra skewer during the lunch service. He remembers the price being $3. Now, he knows the price is much higher at dinner. A lesson learned too late.

In the future, I would like to try Nora's Kabob at lunch time for their lunch specials ($9.25).

Let me know your favorite lunch dishes at Nora's.