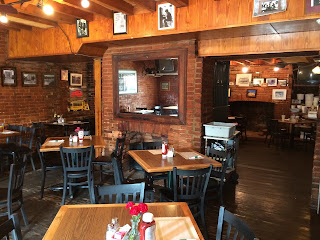 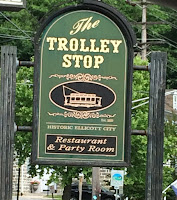 The Trolley Stop is a historic tavern in historic Ellicott City that has been in service since 1833 (one of  the oldest restaurant I've dined in).

You might ask why it is named the Trolley Stop? In 1889 through 1955, the trolley #14 and #9 cars stopped right outside the second floor of the building. 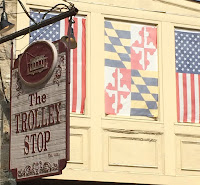 My friend Ivan has been telling me about this place for the longest time. So Ivan, my friend Jack, and I decided to finally give the Trolley Stop a try for lunch. 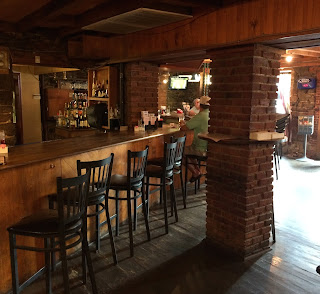 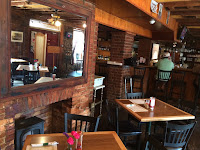 Keep in mind this is an historic property and it feels like it has lots of stories to tell. Pictures and photos hanging on the walls document the timeline of the tavern. It's a cozy place with rustic feel. Noting fancy or new.


For an appetizer, we all split the Trolley Chicken Wings. It really wasn't an appetizer, it was more like a full meal. The wings were savory and sweet and doused in a light honey bbq sauce (aka their "special wing sauce").

I was especially pleased with the generous amount of celery we were given since many restaurants don't give you enough in my opinion.


The service was extra fast. In fact, as we were eating the last wings we were served our main courses.

Jack and I ordered the Classic Club with fries - turkey breast, bacon, lettuce, tomato, and mayo. The entree could barely fit on the plate (in the photo you can't even see the two large pickles that are hidden under the humongous sandwich and fries).

This was another ginormous sandwich - and we are perpetually hungry teenagers saying this. He liked how the gooey texture of the cheese covered the slightly crisp and lumpy crab cakes. It was super tasty. However the potato salad, that looked great, was nothing special.

I'm definitively going to try the Crab Melt next time at The Trolley Stop. 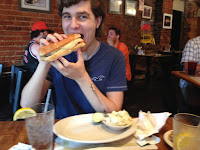 Oh yeah, did I say how big the melt is?

Later that day, my parents decided to go to The Trolley Stop  for lunch based on my recommendation. They split an order of the Turkey Reuben with fries - grilled with sauerkraut, swiss cheese,and 1,000 island dressing served on rye bread.

They also commented on the huge size of the sandwiches making it easy to spilt. It was packed with thinly sliced turkey and creamy Thousand Island sauce that wasn't spilling out like some dressing do in a melt. They really liked the bread. It was toasty, warm and crisp with a lovely buttery taste. 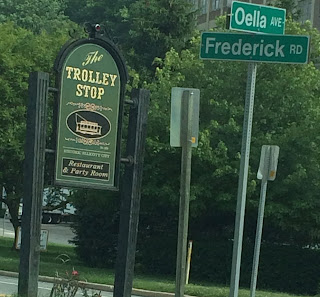 The large entrees at the Trolley Stop are enough to satiate a teenager's cravings.

The lunch and dinner menu has so many choices -  hot or cold sandwiches, wraps, salads, burgers, pastas, soups - really there's something for everyone. They also serve breakfast.

Just remember, whatever you order, that the portions are crazy big. In fact, I didn't even have breakfast the day I went to The Trolley Stop and I was full. My friends couldn't finish all their food and took some home.